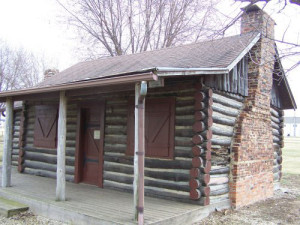 A 115-year-old log cabin is at the center of controversy in northwest Iowa. The cabin currently sits at the Plymouth County fairgrounds in Le Mars, but fair officials want to see the cabin either torn down, or moved to another location.

A group of interested citizens have started a fundraising campaign to hopefully save the log cabin and have it moved to the Plymouth County Historical Museum. The cabin has already been moved three times during its lifetime, serving as a cabin for a former Girl Scout camp.

Mark Johnson, a log cabin preservationist from Minnesota says it could cost $35,000 to fully restore the log cabin — but he believes it should be saved. “I think that they are all worth saving. If we don’t save these, they are all going to be gone and that part of history will be lost,” Johnson says. “Whether or not they are worth saving is a relative term. It’s not in as bad a condition as many others that I have worked on, so it’s definitely a good candidate for restoration.”

The museum board is split on the issue. Wayne Marty is a long-time volunteer and former president of the Plymouth County Historical Museum. He is against having the cabin moved to the museum. Marty says they already have two cabins, one on the outside that he says hasn’t been kept up very well, “And one on the inside that we have constructed so that kids can in fact feel and experience and play in a log cabin. And I just don’t quite see the value of the museum taking on the responsibility and care, long-term, of another log cabin facility,” Marty says.

Grant Hanstein is a director on the museum board. He says the cabin needs to be saved for its historical value. “Just because we have one cabin doesn’t mean we can’t have another. Several collections have more than one item, and this is not just the same cabin, it’s a totally different cabin built 30 years after the previous cabin. It was built differently, it has it’s own history, it’s own story unique unto itself,” Hanstein says.

Officials need to show the fair board a plan of action, along with sufficient secured funding by April 9th in order to save the cabin from demolition.