You are here: Home / Education / August 23 is now the earliest date school may start in Iowa 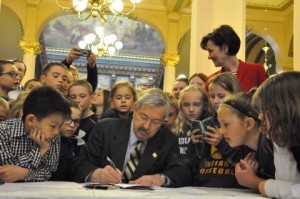 Students from Indianola lean in to get a close view of Gov. Branstad signing the law

Governor Terry Branstad signed Iowa’s new “school start date” policy into law early this afternoon. Dozens of grade school kids were at the statehouse to watch as Branstad took action on the legislation.

“We have had a law on the books for over 30 years that said school is supposed to start the week that includes the first of September, but the Department of Education has routinely granted waivers that lets schools start earlier and earlier that led to the point where we had some schools starting in the early part of August, which was causing a lot of concerns for a lot of Iowa families,” Branstad told the crowd.

The bill Branstad signed into law sets August 23 as the earliest date Iowa schools may start the fall semester.

“I believe that this piece of legislation strikes a good compromise,” Branstad said.

Branstad’s Department of Education put schools on notice four months ago that it would no longer grant waivers so schools could start classes earlier in August. School officials asked legislators to help them retain “local control” and the ability to make school calendar decisions. The state’s tourism industry has long complained the earlier school start dates deprive them of income from families who stop vacationing because school activities have started, plus they lose their teenage workforce. Branstad noted the August 23 date ensures the Iowa State Fair will nearly always be concluded before school starts in Iowa.

“I think it really is a very reasonable and fair compromise,” Branstad said. “Families can enjoy their summer break up to the last week of August and students can enjoy, in addition to the opportunities in the classroom, educational opportunities that can be gained through organizations like 4H and FFA as well.”

Branstad said he’s hopeful the compromise on the school start date controversy “sets a tone” for other “tough issues” that need to be resolved in the legislature.