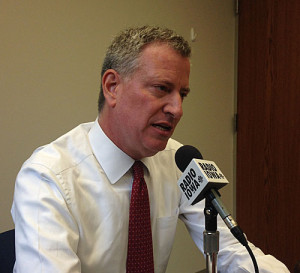 New York City Mayor Bill de Blasio is wrapping up a series of stops in Iowa and Nebraska, arguing it’s time to “transform America” by enacting “progressive” ideas like raising the minimum wage and taxing the wealthy to raise money for investments in education and infrastructure.

De Blasio is in the midst of a campaign to unite progressives around a set of common goals, with plans next month to present a “progressive version” of the “Contract with America” that Republicans used with success in the 1994 congressional elections.

This fall, de Blasio plans to host a presidential candidate forum specifically focused on income disparity, “because I can’t remember an issue this dire that went so unaddressed in Washington.” De Blasio calls the growing gap between the richest and the poorest Americans the “crisis of our time.”

De Blasio, who has been mayor of New York City for about 15 months, managed Hillary Clinton’s first campaign for New York’s U.S. Senate seat 15 years ago. This week, he’s taken some heat for not immediately endorsing her bid for president. De Blasio says he wants to see Clinton’s “clear, bold vision” for the country’s economy first.

“We have a profoundly different reality today than we did eight years ago when Secretary Clinton ran,” de Blasio said. “This is a different economy. It is much more stratified. The income disparity crisis has been growing intensely and literally a different set of issues and concerns than we even had just eight years ago and a different kind of economic crisis than I think we’ve ever seen as a country.”

De Blasio does say Clinton has a “progressive history” as a founder of the Children’s Defense Fund 40 years ago and for trying to reform the country’s health care system in the 1990s.

“She caught hell for that, but she did the right thing and I think it showed a lot of guts and it was exactly the kind of leadership we’re going to need today,” de Blasio said. “That being said, I’ve been very open about the fact — I have great respect for her and consider her a real friend — but I want to see a vision and so far we haven’t had that. It’s a beginning. It’s April 2015. It’s not even April 2016. There’s plenty of time, but I think for a lot of us, we need to see a vision.”

De Blasio said Republican presidential candidates seem to have “gotten the memo” that income inequality is a concern, but de Blasio suggested the GOP is offering just “lip service” to the issue rather than abandoning “trickle down economics.”

“Right now, the politics of this country favors the wealthy. The wealthy have a lock on the decision-making in Washington and most of our state capitals, so we’re not taxing the wealthy, we don’t have the resources, we don’t make the investments and we fall behind,” de Blasio said. “And our people are falling behind.”

De Blasio spoke Wednesday night in Omaha. He spoke today at the Harkin Institute at Drake University in Des Moines.