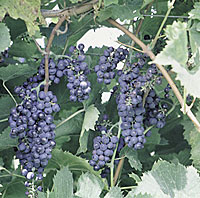 Frost and freezing conditions hit the state the last couple of nights and that has grape growers hoping they don’t see another drop in production like the one brought on by the cold last season.

State Viticulture Specialist Mike White says he had not had any reports of damage following Wednesday’s freeze warning. “For the most part things look pretty good in Iowa. There might have been a vineyard or two in southern Iowa in a low area that might have had some frost, but I think right now we’re looking pretty good,” White says.

White says however, grapevines do have some built in insurance against frost damage. He says each plant has three buds inside with the first being 100 percent fruitful. “Now if it gets out there with one or two leaves and let’s say its April 27th and you get a frost, well the secondary bud inside there will bust open, and it has the ability to produce maybe 30 to 50 percent of a crop,” according to White.

White says the third layer will not produce fruit but it will sustain the plant through the season. He says wineries last year took a hit from a cold and wet spring and a late summer thunderstorm in western Iowa. Yields were cut by as much as 40 percent. Iowa has more than 100 wineries across the state.