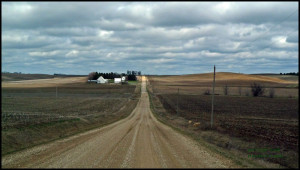 The change from winter to springtime temperatures and recent rains have combined to create some dangerous conditions on many of Iowa’s rural gravel roads.

Dusty Rolando, the engineer for Chickasaw and Floyd Counties, says road crews all over the state are dealing with the annual problem known as frost boils. They’re essentially defective spots in the roadway that develop from the swelling of frost.

“Those spots tend to show up in the springtime with the frost coming up,” Rolando says. “We’re trying to hit those with spot rock…but it’s not a crazy bad year.” Rolando says, at this time of year, it’s a good idea for motorists traveling on gravel roads to slow down.

“If you’re coming up on an area with a frost boil or something that’s pushing up in the middle of the road, you’ll want to make sure you bridge off to the side…typically there will be a lane that’s passable,” Rolando says. “I know a lot of people, at times, might come up on it fast and maybe can’t slow down enough or move over, but I would just be careful when you’re driving and look for those areas.”

Rolando also suggests drivers user alternate routes if possible to save wear and tear on both their vehicles and the gravel roads.