You are here: Home / Fires/Accidents/Disasters / Reconstruction of Lake Delhi passes one year 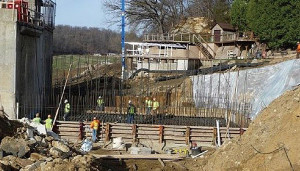 The reconstruction of Lake Delhi’s dam got underway one year ago on April 24th.

It marked the beginning of the physical process of bringing the lake back after the dam breached and the lake drained in the historic 2010 flood. Lake Delhi Trustee Pat Colgan says, one year later, they’re making some significant progress.

Colgan says they appreciate people waiting for five years to get the project completed. He says they hope to have it done by October. Colgan has served as engineer for the project, says phase one, included rehabilitating and modernizing the existing concrete structure.

Now, the main focus is on phase two, which started earlier this month. He says they are mobilizing and have done preliminary work to build roads. “They’ve already started to divert the river through he completed portion of the phase one work,” Colgan says.

Lake Delhi Trustees president Steve Leonard says there’s even more going on than just the main construction project. He says the new bridge and public recreational area at Turtle Creek is also moving along quite well. “Anyone in eastern Iowa, all across the state and in other states will have an additional public recreation area to visit. That Turtle Creek addition will have a brand new beach, brand new restrooms, brand new parking area, brand new boat ramp and a brand new bridge to enable boats to go underneath,” Leonard says. “So we are very excited about that as well as the lake coming back.”

There’s also several projects going on in and along the lake bed. He says they are removing several trees, metal, debris and other items that have to go from the lake bed. Leonard says they are working on docks and lifts and siltation removal for underneath the docks and lifts. Lake Delhi’s reconstruction and restoration project was made possible through funding from the county, the state and Lake Delhi residents, as well as donations to the Community Fund to Rebuild Lake Delhi.

And residents and supporters are ready for the lake’s return, which is officially slated for October 23rd.

“Let’s just hope for a wet enough year for the farmers to be happy, but a dry enough year for our reconstruction to take place on the river,” Leonard says. If you’d like to stay up to date on the photos of the dam’s reconstruction and lake’s restoration, as well as other information, check out the Trustees’ website at lakedelhi.org.