You are here: Home / News / Trump touts June 16 announcement of his intentions 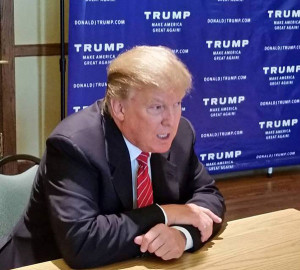 “Our country’s in serious trouble. We’re led by incompetant people. Politicians are all talk, no action,” Trump said during an interview. “They’ll never bring us back to the promised land. We’re losing our country, so I’ll be making a decision on June 16 and I think a lot of people will be very happy about it.”

Trump has flirted with a White House run often in the past, saying he might run as an independent candidate in 2000 and as a Republican in 2004, 2008 and 2012. According to Trump, he can now turn his business empire over to his adult children with confidence — if he runs in 2016.

“I’m going to be releasing financial statements that will show what an unbelievable company I’ve built over the years — how powerful, how strong, great the assets are,” Trump said. “I’ll be releasing a lot of different things about deals and about purchases and abut success and about my deals with China and and about lots of other deals where I won. And the problem with our country is we don’t win anymore. We don’t win with ISIS. We don’t win with China and trade deals.”

A recent Des Moines Register/Bloomberg Politics Iowa Poll of likely Iowa Republican Caucus-goers found 58-percent of those surveyed say they would never support Trump. Trump brushes off those results and suggests the tables will turn if he jumps in the race.

And Trump presents himself as the GOP’s best shot against likely Democratic nominee Hillary Clinton.

“Frankly she can absolutely be beaten by the right candidate,” Trump says.”But a lot of the people running right now as Republicans will never beat her in a million years.”

Trump toured and spoke with a crowd at Music Man Square in Mason City Thursday afternoon. Earlier in the day Trump was in Coralville to help raise money for a veterans memorial.