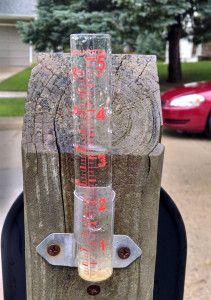 Fears about flooding are rising as more rain is in the forecast over the next few days for parts of the state that are still soggy from up to five-inches of rain last weekend. Meteorologist David Sheets, at the National Weather Service office in the Quad Cities, says eastern Iowa is filling what was until recently a moisture deficit.

“As of a couple weeks ago, there were parts of eastern Iowa that were starting to enter a D-zero drought,” Sheets says. “River levels were at seasonal normals and in some instances, below normal.” That’s changing though and Sheets admits too much rain, too soon, will cause more flash flooding in areas like Cedar Rapids.

Still, the Weather Service is not predicting widespread flooding like in 2008. “The danger we have is the saturated soil conditions and stream levels running high,” Sheets says. “If we were to get a thunderstorm with heavy rainfall, it can quickly lead to flash flooding in urban areas and along streams. That’s what we’re most prone to right now.”

The current forecast calls for more scattered storms across much of Iowa through Sunday but the showers are not expected to bring significant amounts of rain.