You are here: Home / News / Kasich: ‘We’ve got to get things moving’ and reform immigration system 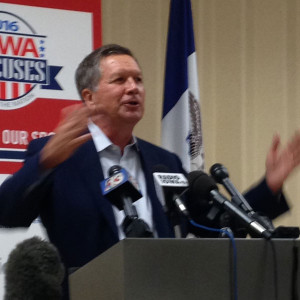 Ohio Governor John Kasich, a potential presidential candidate, is in Iowa today, saying “everything” in government has to be “reformed and innovated” — including the nation’s immigration system.

Kasich made an appearance at a midday forum in Des Moines and someone in the audience yelled out a question about immigration.

Kasich said undocumented immigrants who aren’t criminals should pay a penalty for “ditching the line” and then gain some sort of legal residency status.

“Look, we need the congress to work together to resolve this immigration thing and they’ve got to start fighting all the time and get something done here,” Kasich said. “…Should they become citizens? I wouldn’t favor that, but I said I wouldn’t take it off the board because if you’re going to solve this problem, you’re going to have to have both parties involved.”

According to Kasich, in most cases there has to be compromise between the two political parties to solve major problems like immigration.

“People gotta realize that they’re Americans. They can’t be just pure ideologues and partisans,” Kasich said. “I like to say the Republican Party is my vehicle and not my master. I mean, they’re not going to tell me what to do and so I think on the issue of immigration we’ve got to get things moving on this and we’ve got to get it going soon.”

Kasich’s first stop in Iowa was at the state fairgrounds where some Ohio kids are participating in the National Junior High Rodeo Finals. A woman from Ohio who came to the U.S. from Peru over a dozen years was there on the fairgrounds, with her young son, to greet Kasich and ask for his help in resolving her immigration status. Kasich later told reporters if immigrants are “law abiding and they register” and “maybe” pay a penalty, they should be allowed to stay in the country.

“I’m not for putting ’em on a school bus, driving ’em to the border, openin’ the door and just tellin’ ’em to get out. That’s not practical,” Kasich said during a late morning news conference. “And I have to also say that many of them, even though they came here and did jump the line, they’re significant contributors to our economy and just this morning I see this mom and her son…and you know they’re good people. I mean, they’re made in the image of the Lord. You know, there’s a big element of compassion connected to how we treat people who were trying to find their way to a better life.”

Kasich expressed concern about the “porous” southern border and he told reporters he would spend “significantly more” time thinking about a “practical way” to address border security and the impasse in congress over immigration reform.