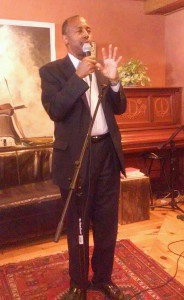 Republican presidential candidate Ben Carson said this morning he’s “deeply disappointed” in the U.S. Supreme Court’s decision that “ObamaCare” subsidies are legal. But Carson is urging ObamaCare opponents not to “waste time and energy mourning” the decision, but instead “redouble” the effort to get congress to repeal the law.

“We have to come out with something that is really appealing,” Carson told reporters in Sioux Center. “…That’s going to require some legislative changes, which means we’ve got to get brave people in there in leadership positions.”

Carson said it’s important to “get rid of things” in ObamaCare that are “killing the economy” and that means ending the “employer mandate” which requires businesses with 50 or more full-time employees to provide health insurance or pay a fine.

“It used to be as your company was growing, you were really happy. You got 40 and then you got 50 and then you got 100 employees. That doesn’t happen anymore. Now you get to 40 and you start backing off,” Carson said. “That antithetical to growth in our society.”

Carson made his comments after speaking to a big crowd this morning at the Fruited Plain Cafe in Sioux Center.

Iowa Congressman Steve King, a leading critic of ObamaCare, issued a video statement late this morning on the ruling.

“This is a frustrating day when you’re in the business of writing laws and watching the Supreme Court amend them at their will,” King said, “by using their own judgment on what public policy should be in the United States.”

King said when it comes to the Affordable Care Act, the court has decided to “make it up” as it goes along.

“And they have ruled, essentially, that the law doesn’t mean what it says,” King said.

This decision on “ObamaCare” was the first of two big rulings expected from the court before it recesses for the summer.

“I’m really concerned about what can happen with the decision on marriage,” King said. “They’ll likely conclude that the Constitution doesn’t mean what it says either.”

Senator Chuck Grassley, the senior member of Iowa’s congressional delegation, issued a written statement late this morning. Grassley said he respect the court, but Grassley said ObamaCare “remains a terrible law” and he is “committed to repealing and replacing it with effective reforms driven by the marketplace, not the heavy hand of government.”

Congressman Dave Loebsack, the only Democrat in Iowa’s congressional delegation, called today’s decision “a big relief for the thousands of Iowa families who would have faced large, unforeseen, out of pocket increases in their health care costs.” Loebsakc said in his written statement that it’s time to “move forward and work to strengthen this law, not continue to try and dismantle it.”

Congressman David Young of Van Meter, one of Iowa’s two rookie Republicans in the U.S. House, issued a statement this afternoon saying there are “real problems with the Affordable Care Act” and it “needs to be repealed and replaced with a common sense patient-centered solution.”

Senator Joni Ernst was the first member of Iowa’s congressional delegation to react today. Read her statement here, along with analysis from a University of Iowa law professor. Freshman Congressman Rod Blum, a Republican from Dubuque, has not released a statement on today’s ruling.

Two other GOP presidential candidates are campaigning in the state today. Former Arkansas Governor Mike Huckabee called the ruling “an act of judicial tyranny” and he says congress should “admit they screwed up” and repeal the law. Rick Santorum will be in Glenwood this evening. The former Pennsylvania senator calls the ruling a “reminder” that in order to get rid of ObamaCare, the nation must elect a “conservative president.”

(This post was updated at 1:31 p.m. with additional information.)