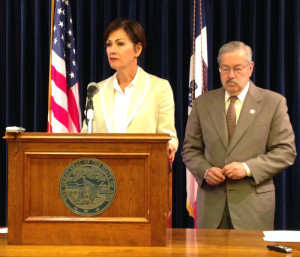 One of the issues Governor Branstad must decide in the next six days is whether to enact new restrictions that could shrink or even derail plans for a new water reservoir west of Osceola.

Branstad’s not providing many hints about his thoughts on the topic.

“I would just ask you to stay tuned,” Branstad told reporters Monday.

Language inserted in a budget bill would stipulate that the new reservoir may only meet the drinking water needs of current residents of Clarke County, but developers plan to serve customers in some of the 12 counties covered by the Southern Iowa Rural Water Association.

Lieutenant Governor Kim Reynolds is from Osceola and served as Clarke County treasurer for 16 years, but she’s not taking a public stand on the controversy.

“I am a strong proponent of individual property rights,” Reynolds says. “…I also am an elected official and a citizen of Clarke County and Osceola and I know how important it is in the state of Iowa, not just in Clarke County but in southwest Iowa, to ensure that we have drinking water and enough water to not only sustain the county, but to sustain growth.”

Representative Bobby Kaufmann, a Republican from Wilton, helped craft the proposed restrictions which he says would let the project go forward, but under certain conditions.

“It forces them to first consider other options that do not require eminent domain, while also still allowing for them to condemn for water if they need it,” Kaufmann says. “But they can only condemn for what they need as opposed to what they would want for other purposes.”

Kaufmann argues water could be piped into Osceola from another water district — and he says West Lake, the current source of water for Osceola, could be expanded instead of digging another lake.

“The size of the lake of what they actually need I don’t believe anywhere near 800 acres,” Kaufmann says. “To me, it’s just an insult to landowners, to property rights.”

The proposal that Governor Branstad is reviewing would force developers to drop plans for the new reservoir near Osceola if a “more feasible” water source could be located.

Planning for a new reservoir near Osceola started more than a decade ago. After federal funding fell through, the size of the proposed lake was cut by nearly two-thirds because it will not be used for recreational purposes. Backers of the project say the current water supply isn’t meeting current demands and the area cannot grow without a larger supply of water. A commission that’s managing the reservoir project already has purchased land from four landowners for the proposed lake and have pending agreements with seven other landowners.

The lake project was at the center of a 2006 political stand-off at the statehouse, as legislators voted to override then-Governor Tom Vilsack’s veto of a bill that established new limits on local governments’ ability to seize private property for economic development projects.