You are here: Home / Crime / Courts / Loebsack says some in GOP ‘hyperventilating’ over same-sex marriage ruling 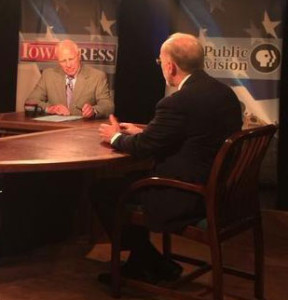 Congressman Dave Loebsack — the only Democrat in Iowa’s congressional delegation — says last week’s Supreme Court ruling on the Affordable Care Act means “ObamaCare” is “here to stay” and the court’s decision on same-sex marriage was “a great victory for equal rights.”

“Upwards of 60 percent of the American people think that that was the right decision,” Loebsack says.

Many of the Republican presidential candidates who’ve traveled through Iowa in the past few days have criticized the decision. Some have advocated for nationwide judicial retentions elections for members of the Supreme Court, as a means to ending life-time appointments to the court. A few have called for an amendment to the U.S. Constitution that would ban same-sex marriage. Loebsack says that’s just “hyperventilation.”

“The American people have decided already that same-sex marriage is accectable…and they are for it,” Loebsack says. “Now look, if folks on the Republican side of the aisle, whether it’s at the congressional level or those running for president, if they want to continue down this road they are not going to find a lot of support for the kinds of things they’ve been talking about.”

Loebdsack says the Constitution’s First Amendment already protects religious insitutions that refuse to marry a same-sex couple, but he is “open” to considering proposals from Republicans that might offer additional legal protections to churches, synagogues and mosques.

“To protect religious institutions, I can understand that, but to call it tyranny and use the kinds of language they’ve used before — this is the kind of language that Americans are tired of,” Loebsack says.

Loebsack made his comments this afternoon during taping of the “Iowa Press” program that will air on Iowa Public Television Friday night.