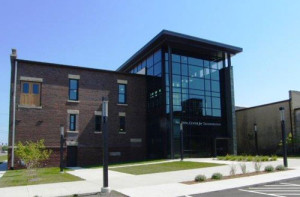 West view of the atrium at the Iowa Transportation Museum in Grinnell.

The Iowa Transportation Museum in Grinnell faces an uncertain future. A court this month placed the museum in foreclosure.

Chuck Brooke, the museum’s executive director, says state and federal financing was lined up for the project a few years ago, but some federal tax credits fell through.

“Since then, we’ve been trying to raise funds and work our way out of this situation,” Brooke says.

Brooke is optimistic money can be raised to avoid having the museum’s assets sold by November 5th. That’s the deadline set by the court handling the foreclosure. The museum is located in a recently-restored facility in Grinnell that’s on the National Register of Historic Places.

“There was a guy named Henry Spaulding that came to Grinnell in about 1876 and started a buggy and wagon factory and he built buggies and wagons to about 1910, then he started building cars,” Brooke says. “He built 1500 cars between 1911 and 1915 and we have one of those cars that we have on display.”

The process of converting the facility to a museum and conference center started in 2010 and it was completed a couple of years later. Brooke says about a thousand people toured the museum last year. The museum owes an Iowa City bank more than a million dollars.

The bank went to court in March to start foreclosure proceedings.