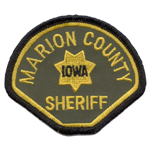 A 13-year-old runaway was found safe Wednesday, 35 miles from his home and more than 48 hours after he was reported missing. Dalton Tucker was found at the Jordan Creek Mall in West Des Moines.

On Monday, Tucker left his home in the Marion County town of Swan. Marion County Sheriff Jason Sandholdt say deputies were worried that Tucker may’ve disappeared in the Des Moines River, not far from Swan, when they found some of his wet clothes.

“After talking to the young man, he said he tried to swim across the river. He got part of the way out, had some difficulty and got scared because he thought he was going to drown. He did make it back to shore,” Sandholdt said.

The boy also placed himself in danger Monday when he hitched a ride with a stranger from Vandalia to West Des Moines. “Anytime a young boy like that is out on their own, I don’t think a lot of times they realize how serious it is,” Sandholdt said. “I think he does now and realizes what danger he could’ve been in.”

The teen ran away from home after getting into an argument with his parents. “We’ve had a long discussion with the family,” Sandholdt said. “They want some certain things in the family to change and for everybody to kind of recognize each other’s needs. They’re willing to work on that.”