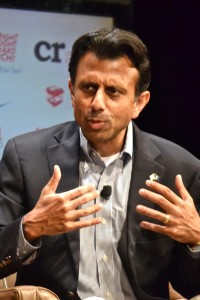 Presidential candidate Bobby Jindal is blasting the media for all the attention being paid to his Republican rival Donald Trump.

“We’ve spent our time here on the ground. We made the commitment to go to every one of the 99 counties,” Jindal told reporters Sunday after an appearance in Waterloo. “…What is encouraging to us is we’re seeing larger and larger crowds, more and more people responding to our positive message.”

But Jindal complained Monday that the “gold standard” for getting mentioned in the news is to mention Trump, so he’s decided to “randomly” put Trump’s name into his stump speech.

“There are a lot of great talkers in this race,” Jindal told reporters Sunday after speaking to a crowd in Waterloo, when he did not mention Trump by name. “I think voters are looking for a doer, not a talker.”

Jindal has held more than five dozen events in Iowa in the past 20 months and Jindal’s campaign team cites internal polling indicating Jindal’s gaining ground here after strong performances at big events, like a summit in Ames last month where Jindal and nine other candidates spoke. However, many Iowans are telling Jindal they will wait to make their choice closer to February 1, the night of the Caucuses.

“I think that’s actually good for me because I think there are a lot of folks who can give a great one-liner, deliver a wonderful speech, but they may not be able to stand up to scrutiny,” Jindal said. “…I think it’s a great thing that Iowa voters understand this is an important election, they’re taking it seriously and they don’t want to commit too early.”

Jindal said in a statement emailed by his campaign that “the media is glued to everything Donald Trump says,” while failing to pay enough attention to what Jindall called the “soap opera” on the Democratic side. Jindal will be at the Johnson County Fairgrounds this evening for a town hall meeting.