You are here: Home / Sports / Transfers excited to play for Drake on European basketball trip 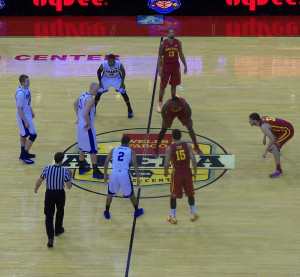 A pair of transfers will get their first action in a Drake uniform later this week when the Bulldogs leave on a trip to Europe.

“So excited, it’s been like 18 months, something like that, it’s been quite the journey,” Abrahamson says. Abrahamson says the wait was frustrating, as you learn a lot by watching, but you can’t do anything about it.

Abrahamson says the Bulldogs have high hopes for next season. “I think now the pieces are here, last year we did the best with what we had. No offense to any of those guys, they are great guys and they are my friends, but at some point you know the time is now,” Abrhamson says.

Drake coach Ray Giacoletti says a summer trip is even more important for the players who sat out last season so they can knock the rust off in a game sistuation. He says they can then focus on getting better after they get back into the swing of things.

The Bulldogs leave on Wednesday and will play games in Denmark and Italy.