You are here: Home / News / Fiorina: ‘The professional political class has failed us all’ (AUDIO) 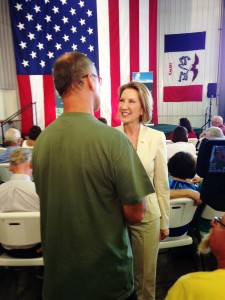 Republican presidential candidate Carly Fiorina drew a crowd of more than 250 to town hall meeting tonight near the small north central Iowa town of Alden. Fiorina, the former CEO of Hewlett Packard, played up her status as someone who has never held elected office.

“The professional political class has failed us all,” Fiorina said.

Fiorina said a set of “festering issues” has gone unresolved for decades and the federal government’s “bloated” bureaucracy must be “cut down to size.”

“That means we have to challenge the status quo of Washington, something that the political class hasn’t been willing to do for a long time,” Fiorina said. “And I think that’s why we see so many people saying: ‘You know, I don’t care if you’ve been in politics all your life. What I care about is do you understand how to translate a good speech into real results.'”

Fiorina criticized the concept of “revenue neutral” tax reductions and she promised to push for tax cuts that would reduce the size of the federal government. She also would cut the size of the federal workforce by a quarter of a million workers, by not replacing Baby Boomers who are expected to retire from their federal jobs within the next five or six years.

Fiorina’s performance in last week’s nationally-televised debate has pushed her up into fourth place in a new CNN poll of likely Iowa Caucus goers. Dave Dirksen of Iowa Falls, sitting near the top of the bleachers at tonight’s event, said he’s afraid the GOP “machine” will push the party to accept a “middle of the road” nominee rather than a “business person…that has some guts” like Fiorina.

Fiorina spoke briefly, for about seven minutes, then took questions from the crowd for more than 50 minutes. One woman in the crowd raised concerns about vaccinations and Fiorina said it should be the “parent’s choice” whether their child is immunized. Afterwards, Fiorina told reporters she schools should also have the right to refuse to let children attend classes if they do not have immunizations for serious contagious diseases, like the measles.

“I think when we’re talking about some of these more esoteric immunizations, then I think absolutely a parent should have a choice and a school district shouldn’t be able to say, ‘Sorry, your kid can’t come to school,’ for a disease that’s not communicable, not contagious and where there really isn’t any proof that they’re effective at this point,” Fiorina said.

Fiorina, when speaking with the crowd, pointed to the HPV vaccine, which prevents a sexually-transmitted infection that can cause cervical cancer. Fiorina said her daughter was “bullied by a school nurse” into getting Fiorina’s granddaughter vaccinated.

Tonight’s event in Alden was hosted by Republican mega-donor Bruce Rastetter, in the machine shop for his agribusiness. Rastetter plans to host more town-hall meetings in Alden for other Republican candidates.

AUDIO of Fiorina’s appearance in Alden