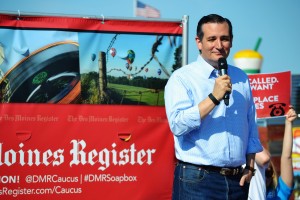 Republican presidential candidate Ted Cruz is keeping his critique of the Jimmy Carter era in his stump speech, despite the former president’s revelation yesterday that he’s undergoing treatment for brain cancer.

During a speech this morning at The Des Moines Register’s Political Soapbox at the State Fair, Cruz talked about what he sees as “uncanny” parallels between President Obama and President Carter.

“Same failed domestic policy; same misery, stagnation and malaise; same feckless and naive foreign policy; in fact, the exact same countries — Russia and Iran — openly laughing at and mocking the president of the United States. Now why is it that this story gives me so much hope and encouragement?” Cruz asked and the crowd laughed. “Because we know how that story ended.”

And it ended, Cruz explains in his stump speech, with the election of Republican Ronald Reagan in 1980. Late this morning, Cruz told reporters at the State Fair that Carter’s policies are fair game.

“At this point I’m visiting with grassroots activists,” Cruz said, “and what I commented on was the public policy of the Carter Administration in the 1970s and it didn’t work, millions of people hurt and, as a result, it sparked a grassroots movement to turn this country around.”

Cruz will be hosting a rally this evening in downtown Des Moines featuring people he calls “hero” business owners who have been sued for refusing to serve same-sex couples who are getting married.