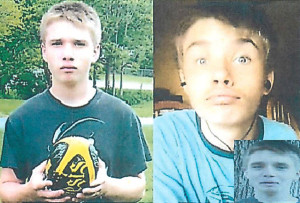 Authorities are asking for the public’s help in finding an Iowa teenager who’s been missing for more than two years. Sixteen-year-old Fredrick James Workman of Fairfield was living in a youth facility in Des Moines when he was reported missing on August 2, 2013.

The Polk County Sheriff’s Office issued a news release today stating detectives have received leads from across the state of Iowa, leading investigators to Washington, California, Oklahoma, Illinois and Missouri — with no luck in locating Workman.

At the time he went missing, Workman was 5 foot, 7 inches tall and 145 pounds with short blonde hair and blue eyes. He has a small scar on the bottom of his chin and may use the last name of Shields.

Anyone with information in the case is urged to call Polk County Crime Stoppers at 515-223-1400 or the National Center for Missing and Exploited Children at 1-800-THE-LOST.