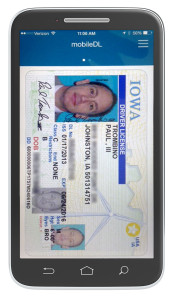 The availability of a mobile driver’s license (MDL) in Iowa hinges on testing now underway with Department of Transportation employees.

MorphoTrust U.S.A. is developing the software for the license and company representative Jenny Openshaw is in Des Moines helping with the test of the system.

“What DOT wanted to do was start with their own employees first so that we can get some good information and statistics to help us better understand the issues and design the project going forward from there. Ultimately leading to the point where it will be made available to the general public,” Openshaw says. She says 20 DOT employees have started using the electronic licenses and another 80 will be added to the group.

“An email is sent to them with some instructions on how access the application and get it downloaded onto their mobile phone,” Openshaw says. “Once it is downloaded, they have to enter a user name and a password just to basically initiate the application.”

For those of you who don’t like the photos the DOT takes for your driver’s license, with this variation you get to take a selfie that’s used to confirm your identity.

“Their picture is compared doing a facial recognition match just to do the verification that it is actually the person who is receiving the MDL that is getting it. And then the application is downloaded automatically on their phone,” Openshaw says.

Openshaw says most people won’t want to hand over their phone to someone trying to check their identity, and they have planned for that.”The MDL is being designed with security features imbedded in it that are readable by a mobile application on another mobile device,” Oppenshaw explains. “So in the instance of a retail situation — they could either use a barcode reader at the point of checkout or a mobile app on iPad or another phone — and basically, when you show your MDL you hold up your phone and the app detects the presence of the hidden security feature in the MDL and it says ‘ok, it is good, it’s valid.'”

Having an MDL may be more convenient — that is until the battery on your phone runs down. “Well we are even looking at that eventuality as well.There are some technologies that allow you to have a screen image even is your phone goes dead,” Oppenshaw says. “But keep in mind, that the traditional plastic card that you carry in your wallet today is not going away immediately, and probably won’t go away for awhile.”

She says there are no plans now to make the MDL mandatory. “Iowa as well as most of the other states that we work with envision the MDL as an option that you would opt in to receive. Because the people who would like to use it on a mobile device can do that. But you would still receive your plastic card as well,” Oppenshaw says. She says it will be similar to now when you fly and you get the electronic ticket, but also often print out a paper copy of your boarding pass as well. So, she says a dead battery on your phone would likely not be an excuse for not having an ID.

“You’d probably pull out your card and use it if your cellphone was dead,” Oppenshaw says. The DOT employees are testing the MDL’s ability to record updates sent to the phone for things like a change of address, organ donor status or a change in age of the driver. Oppenshaw says MDL could become available to all Iowans in 12-to-18 months after the 90-day testing period is completed.