You are here: Home / Fires/Accidents/Disasters / State to test ducks and geese taken this fall for avian flu 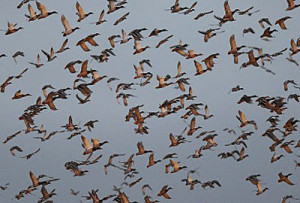 Iowa will be part of a national surveillance effort this fall to test wild waterfowl like ducks and geese for avian influenza. The migrating birds last spring are suspected of causing outbreaks at more than 70 poultry operations in Iowa.

Kevin Baskins, spokesman for the Iowa Department of Natural Resources, says trained staff members will be dispatched into a host of popular hunting areas.

“We will have people out in the field,” Baskins says. “This fall, we’ll be concentrating on the Upper Mississippi, Iowa, Skunk and Wapsipinicon River watersheds and the Chariton and Grand River watersheds.” Later in the winter, he says the focus will shift to the Missouri and Little Sioux River watershed.

Testing actually began this summer as part of the DNR’s annual waterfowl banding work and will continue with hunter-harvested ducks this fall and into the winter. “As the hunters harvest ducks, we will have some people out there that will be trying to collect samples from those ducks that have been harvested,” Baskins says. “We’ll target the dabbling ducks, which are teal, gadwall, widgeon and mallards, simply because those are the ones most likely to carry avian influenza.”

Sample collections will only take a few minutes and no hunter information is needed, though hunters can be notified of the results, if they choose. Baskins says hunters should stay vigilant for signs of an outbreak.

“Hunters should avoid harvesting any ducks that appear sick or unhealthy or acting odd and they should always make sure that they clean, rinse and cook it thoroughly,” Baskins says. “We’re also asking hunters, if they’re in the field and they see five or more dead ducks in an area, to report that to us at DNR so we can investigate that.”