You are here: Home / News / Vilsack says ‘no one…tougher and more tested’ than Clinton 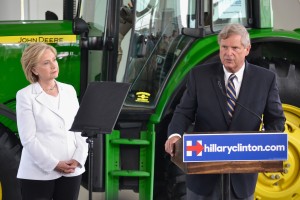 Tom Vilsack introduces Hillary Clinton and comments on his recent endorsement at her event in Ankeny.

Former Iowa Governor Tom Vilsack — the current U.S. Secretary of Agriculture — walked onto a stage in Ankeny this afternoon with Hillary Clinton and explained to the crowd why he has endorsed her bid for the White House.

“I know of no one in America today who is tougher and more tested,” Vilsack said.

Vilsack traced his connection to Clinton back to the 1970s, when Clinton shared an office with Vilsack’s late brother-in-law, Tom Bell. Bell and Clinton worked for the Watergate Committee in congress. Vilsack called Clinton supremely loyal, and credited her for campaigning for him in 1998 when he was 23 points behind in his race he ultimately won to become Iowa’s first Democratic governor in three decades.

This is the second time Vilsack has thrown his support behind a Hillary Clinton for president campaign. Vilsack endorsed Clinton in the spring of 2007, a couple of months after ending his own presidential campaign.

“This is a woman who will listen to us, who will fight for us, who will make sure that we win this election and when she does, she will deliver for us,” Vilsack said. “She will make us proud.”

Vilsack later told reporters there was no specific reason for the timing of his endorsement, other than he’s just back from a vacation. Vilsack endorsed Joe Biden’s first bid for the White House nearly 30 years ago. Vilsack called Biden a wonderful man, but Vilsack says his endorsement of Clinton was a personal decision based on the decades of friendship among him, his wife, Christie and the Clintons. Clinton was in Ankeny this afternoon to unveil a series of ideas she says will revitalize rural America. Check back here soon for more details.