You are here: Home / News / Fiorina draws crowd in Cushing that’s bigger than the town 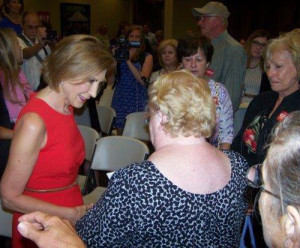 Republican presidential candidate Carly Fiorina today said she’s “encouraged by the support” she’s getting in Iowa — and she suggests CNN and the Republican National Committee will face questions if she’s not among the 10 candidates included in the next nationally-televised prime time debate.

“Iowans, just like people all across the country, are sick of the professional political class,” Fiorina said today in Le Mars. “They’re sick of a federal government that doesn’t function and that doesn’t do their work and so they’re looking for a different kind of leadership and that’s why the firehouse in Cushing was packed.”

According to The Sioux City Journal, the county sheriff estimates Fiorina drew a crowd of up to 250 Wednesday night in Cushing. That’s about 25 more people than live in the town.

“I’m not a professional politician. I’m not a celebrity,” Fiorina said in video posted on the newspaper’s website. “When I decided to get into the race, very few people had ever heard my name.”

Fiorina’s performance in the “happy hour” debate for candidates who didn’t make the “top 10” cut for a prime time debate earlier this month dramatically boosted her standing in the polls. Fiorina rose to fourth place in a recent poll in Iowa. She’s behind only Donald Trump, Ben Carson and Scott Walker. Among the four, only Walker has experience in elected office and Fiorina stresses her business background and role as the former CEO of Hewlett Packard.

“I led HP through a difficult time,” she said today in Le Mars, “the worst technology recession in 25 years.”

Fiorina laid off 30,000 HP employees and the company’s board of directors forced Fiorina out after she engineered the acquisition of rival Compaq. She presents that record as a positive, not a negative.

“Some of our strongest competitors — Gateway, for example, that used to be in Iowa, disappeared under the waves, so sometimes tough calls are necessary,” Fiorina says. “We saved 80,000 jobs and HP is now 300,000 jobs.”

Fiorina spoke to a crowd of more than 100 in Le Mars this morning. Afterwards, Fiorina told reporters it was “so disappointing” Democrats were talking about gun control measures in the wake of Wednesday’s murders of two journalists in Virginia.

“Every time we have a tragedy, they use it as an opportunity to push forward their ideological agenda,” Fiorina said, “even though we know that in the vast majority of the cases the things they’re pushing for would have made no difference at all.”

Fiorina said time would be better spent talking about better ways to identify and treat people with mental illnesses who are a danger to themselves and others, plus she’s concerned about what this incident says about the culture.

“There’s something really wrong when we have gotten to be such a 15-minutes-of-fame obsessed culture that someone thinks ‘murder by selfie’ is a good idea,” Fiorina said.

The man who committed the murders videotaped the shootings and then posted the video on Facebook before he killed himself.