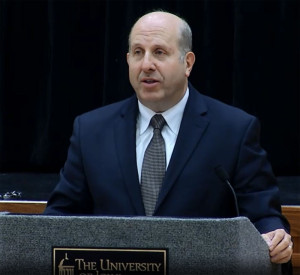 A second finalist who hopes to become the new president at the University of Iowa is on campus today for meetings and then an afternoon forum.

The first finalist, Oberlin College of Ohio president Marvin Krislov, spoke during an open forum Thursday. He says he agrees with a former U-I president who says people, not buildings make a great university.

“And that has been the take away message from my visit today. Let us begin with the people of a great university,” Krislov says. “Our vision for Iowa starts with a dedicated community of educators and scholars, faculty, staff, students and community, and the state working together.” Krizlov says he is exited by the values and strengths that already exist at the university.

“Excellence of course is foremost. And I have been stunned by the strong commitment to the arts and humanities as well to the sciences and health sciences and social sciences. Not all universities have this balanced approach to excellence and academic strength,” Kirslov says.

He says he is “deeply committed” to the notion of access an affordability. “Particularly for those residents of the state of Iowa. I have been impressed by the state’s history of committeemen to higher education and also to an excellent K-through-12 system,” according to Krislov.

Krislov says the problems facing the University of Iowa are not much different than the problems facing other schools across the country.”Perhaps number one is the financial challenge — how to keep education affordable for middle class and working families. But also to pay attention to faculty and staff support and program quality. There are many different strategies that should be looked at, and there has been much that has been written about this topic,” Krislov says. “And so I would say that all of those strategies should be examined — and most of them should be tried.”

The second finalist visiting the Iowa City campus today is Senior Vice President for Academic Affairs and Provost at Tulane University, Michael Bernstein.  His forum will be streamed live on the U-I’s presidential search page.

Two more finalists will visit campus on Monday and Tuesday. Their names will be announced 24 hours before their visit. The Board of Regents will interview the candidates September 3rd and then pick a new president.

The new president will replace Sally Mason who retired.