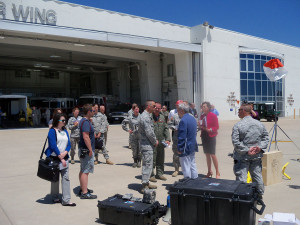 The Iowa National Guard has based helicopters in Boone since 1954, but the central Iowa community of now faces the possibility of losing its decorated aviation wing.

Boone is foremost a railroad town and known as the birthplace of former First Lady Mamie Eisenhower. It also has a key role in national security, with some 500 soldiers and aviation personnel based at the Boone Armory.

Mayor John Slight says the National Guard helicopters are part of the weekly routine.”Wednesday is typically the flight night and you can see helicopters flying all over the place. It’s kind of neat and I know a lot of people watch and pay attention to it,” Slight says.

Slight says the National Guard’s facility brings people, and business, into the community. “They’re coming to Boone using our restaurants and gas stations, they shop here, and I know when we do our homecomings and sendoffs we draw huge crowds. So yea, Boone’s definitely a military town,” Slight says.

New, advanced Black Hawk helicopters that cost 15 million dollars each started flying out of Boone this year. When the final deliveries are made, there won’t be enough hanger space to shelter all ten, so the Guard is looking at shifting the Black Hawk company, and its aviation support battalion, to Des Moines where they have unused hanger capacity. Up to 200 soldiers, including 40 full-time positions, could be reassigned out of Boone. Korean War veteran Bob Fisher was stationed at the armory long ago, and now directs Boone’s Economic Growth Corporation. “Well they’re an industry, and one hates to lose any industry, so we’re going to push and hopefully pull the right strings to keep them here,” Fisher says.

Local officials have already reached out to National Guard leaders, including Commanding General Timothy Orr who is from Boone, and also appealed to Congressman King. Kurt Phillips heads the Chamber of Commerce. “Our national guard is always active in our community festival every year, they sit on boards, they are a part of groups within the community, they volunteer their time, so it isn’t just the jobs they bring here and the industry they run, it’s their activeness in our community,” according toe Phillips.

Bringing the choppers to the Des Moines would help reestablish the National Guard’s aeronautical mission for its airbase at the Des Moines Airport. An aeronautical mission qualifies the Guard for a one dollar annual lease, as allowed by the Federal Aviation Administration. The arrangement was challenged when the Air Force phased out Des Moines’ F-16 fighter jets. Airport Manager Kevin Foley is suspicious of the proposed helicopter relocation.

“I believe it is a maneuver to try to say they have an aeronautical mission in Des Moines,” Foley says. “So, they’re trying to insulate the lease, trying to keep that one dollar a year payment on the lease.”

As lease negotiations drag on, everyone agrees it will be resolved not in Iowa, but Washington, including Colonel Greg Hapgood is the spokesman for the Iowa Guard. “The Air Force will be the first one to tell you everything we do is related to an aeronautical mission,” Hapgood says. “I know the airport disagrees with the Air Force’s interpretation of that, but ultimately it’s up to the FAA as a federal entity to come up with a definition for an aeronautical mission.”

Back in Boone, the Chamber’s Kurt Phillips says they won’t go down without a fight.”It’s a shell game. So if you lose the helicopter division down to Des Moines, we have an empty building now here too,” Phillips says. “So one more strike against rural America that bolsters the city. Yea, that’s not exactly anything that I’m really excited about.”

The National Guard has the final say, but for now, Company C’s helicopters, and its aviation support group, are safe in Boone. If the National Guard goes forward with the transfer, Colonel Hapgood says other units would be moved in to make up for the loss.