You are here: Home / Education / University of Iowa given exemption from tuition increase 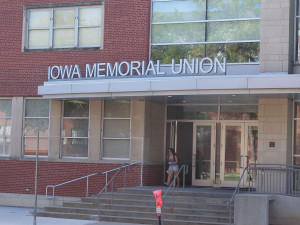 The student union at the University of Iowa.

The Board of Regents voted on the proposed tuition increase for the spring semester with a twist that will exempt the University of Iowa. The vote came after the board heard from the student leaders at the three schools.

Iowa State University student body president, Dan Breitbarth, told the board there is support for the increase in Ames as resources have been stretched thin.

“Our students have been very patient and understanding with the big changes that are occurring due to our record-breaking enrollment numbers. And the administration and university faculty continue to devote their lives to the success of our students. But we are all aware of the need for additional support,” Breitbarth says.

University of Northern Iowa student body president Katie Evans says students on the Cedar Falls campus have recognized the financial issues the school faces with its large enrollment of instate students. She says the students were supportive of small tuition increases in the last two years when tuition was frozen. “And now we are at a crossroads. This is the third straight year of a tuition freeze. Our faculty, staff and students deserve better,” Evans says.

But University of Iowa student body president, Elizabeth Mills, argued for exempting her school. “When the spring semester tuition increase was announced, I received feedback from my peers that they were concerned about tuition increasing midyear,” Mills says. “Many have shared their struggles with already difficult and sometimes inflexible financial aid plans. and are worried that they cannot be used to cover this additional tuition increase.” The proposed increase amounts to $100 for instate students. “While a hundred dollars may not seem like much, for many students it can be a barrier,” according to Mills. “That extra hundred dollars can mean a month’s worth of groceries, a fourth of a month’s rent, or renting textbooks, a cost that consistently increasing for students.”

Board of Regents President Bruce Rastetter says the board had hoped to freeze tuition again in the spring, but says they changed after the legislature’s appropriation was below their request.

Rastetter say they would have like to have had the Iowa Legislature respond more quickly, but they didn’t end the session until June and they felt they needed to increase the tuition in the second semester because the schools needed the funding.

The board approved an amendment to the tuition proposal to exempt the University of Iowa from the increase and then approved the measure. Regents Kate Mullholland of Marion voted against the motion, as did Regent Larry McKibben of Marshalltown. McKibben says he supports a tuition freeze, but felt he could not vote for the U-I exemption at the same time they board is asking the legislation for additional overall funding for the school.