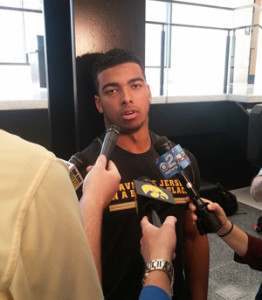 The Iowa offense remains confident heading into Saturday’s showdown at 20th ranked Northwestern despite injuries that has forced a reshuffling along the offensive line.

Cole Croston is expected to start his third game at left tackle for the injured Boone Myers and freshman James Daniels was moved to right tackle after Ike Boettger was injured in the Hawkeyes’ victory over Illinois.

Senior running back Jordan Canzeri had 256 yards in the win over the Illini. He says the Hawkeyes are focused on what it will take to get a win at Northwestern.

“They work hard and they are guys that have since the beginning and young guys that it is great to see step up and be a solid unit”, said running back Jordan Canzeri. “Brian Ferentz does an awesome job coaching them and they have all shown they are able to produce for us. Whoever was in what position and whoever gets mixed around does not take away the confidence from our offense.”

The Hawkeyes are 6-0 and take on a Northwestern team that is 5-1.