You are here: Home / Human Interest / Iowa native at NASA helped producers of ‘The Martian’ 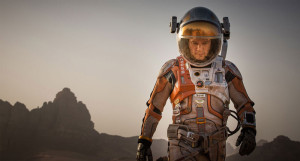 From “The Martian” courtesy of 20th Century Fox.

One of the most popular movies in America was made with the help of a southeast Iowa native who’s now the head of NASA’s Planetary Science Division.

Jim Green was a consultant for “The Martian,” a film about an astronaut who ends up marooned on Mars. Green is a Burlington native and says he was thrilled to get to work with legendary director Ridley Scott, known for sci-fi blockbusters like “Blade Runner” and “Alien.”

“One of my favorite movies is ‘Alien,’ I’ve watched that maybe 50 times,” Green says. “So, it was easy to say, ‘Yes, I’ll talk to Ridley,’ and once I knew that Ridley was trying to develop a movie where he was painting the picture of a realistic Mars, I wanted to help him.” While he tried to aid the filmmakers in creating an accurate representation of life on the Red Planet, he says the Hollywood crew did take a few liberties with reality to make things more interesting.

“The first thing is the dust storm on Mars which looks worse than anything that would ever happen here on Earth, I mean, Lawrence of Arabia never experienced anything like that,” Green says. “On Mars, it’s not like that at all. It wouldn’t have caused any of the problems that forced them off the planet.” In the film, a team of astronauts has to abandon their base on Mars and come home, leaving one of their own behind, thinking he was killed in the enormous, raging storm.

Leaving behind the science fiction, Green says NASA is making great technological advances and we’ve “turned a corner” in efforts to actually send explorers to Mars. “We are following the president’s direction for which in the 2030s, we want a human presence at or near Mars,” Green says. “That could mean some flybys or perhaps even landing or touching down of Phobos or Deimos, two small moons of Mars. In the 2040s and 2050s, the president wants boots on the ground.” Green says an astronomy class he took as a junior at Burlington High School reinforced his desire to have a career in science.

He went on to earn a PhD in Space Physics from the University of Iowa. Green is back in Burlington this week and spoke at Southeastern Community College about his work at NASA and on the movie.