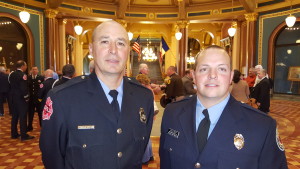 Two firefighters who rescued a man from a burning home in Cedar Falls last year were honored today at the statehouse.

Kyle Bovy is now a firefighter in Waterloo, but he was working for Cedar Falls Fire Rescue on April 26, 2014 when he was sent to a residential fire. “While we were in route, they said someone was trapped inside. The neighbor tried to get him out, but couldn’t. They heard him screaming, but then didn’t hear anything,” Bovy said.

When Bovy arrived at the scene, he and fellow firefighter Eric Jensen were ordered inside and rescued the unconscious man, who was flown to University of Iowa Hospitals. The victim, following months of rehab, made a full recovery.

Jensen, when asked how it feels to know he saved another person’s life, said he was only doing his job. “It’s a good feeling…hopefully once in a lifetime…if it would have happened the day before or the day after, (another firefighter) would’ve done the same thing,” Jensen said.

Jensen and Bovy were among five police and rescue personnel presented with the 2015 Sullivan Brothers’ Award of Valor at a ceremony in the State Capitol rotunda.