You are here: Home / Fires/Accidents/Disasters / One third of new cars don’t come with spare tires 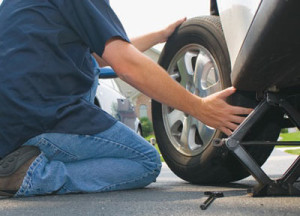 As winter weather approaches, one of the last things Iowa motorists want to hear is the whup-whup-whup of a flat tire on their vehicle.

A new study finds more than a third of all new cars being sold don’t come equipped with spare tires. AAA-Iowa spokeswoman Gail Weinholzer says if you’ve bought a new car in the past few years, you’d better pop the trunk and see what you have.

“The first thing drivers need to do is determine what type of situation they have with a new vehicle,” Weinholzer says. “Do they have a spare tire and if so, is it properly inflated? Do they have a run-flat tire which will allow them to drive up to 50 miles before they need to address the situation. Or, do they have a tire inflator kit which is very effective but is for very limited uses.”

In 2006, only 5 percent of new cars did not come equipped with a spare tire, but in the 2015 models, 36 percent are now only equipped with run-flat tires or inflator kits — no spares. Automakers are likely trying to save on expenses, cut weight, add trunk space and boost fuel economy with the move, but Weinholzer says eliminating spare tires could leave Iowans stuck on the roadside.

“It’s important that drivers know the situation with their vehicle and understand that they may need a tow, and that they may not be able to change the tire, obviously, if they don’t have a spare,” Weinholzer says. “One other thing to keep in mind, some of these tire inflator kits can cost up to $300 per use and only have a shelf life of four to eight years.”

The study also found 97 percent of men claim they know how to do the job versus 68 percent of women.