You are here: Home / News / Christie says Carson should ‘confront’ controversy over his life story 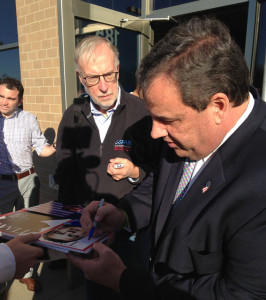 Republican presidential candidate Chris Christie is — to a degree — taking issue with Donald Trump’s comments Thursday night in Iowa about Ben Carson, but he’s also offering Carson advice on how to respond.

Trump used frank language to suggest Iowans should be skeptical of Carson’s personal story of religious conversion after fits of “pathological” teenage temper.

Christie said this morning on Laura Ingraham’s national talk show that Trump’s comments were “not the kind of stuff” that should be coming out of the mouth of a presidential candidate, but this afternoon Christie said this to reporters in Iowa: “Everybody’s responsible for their own personal story…Dr. Carson’s going to have to answer the questions about his personal story that the American people want to hear and if he answers them to their satisfaction, then I’ll be satisfied, too.”

Carson has recently blasted the media for questioning his personal story, which Carson chronicled in his book “Gifted Hands”. Christie this afternoon suggests Carson should “confront” the controversy.

“You can’t run away from that. You have to confront it. You can’t just say it’s not fair. There’s lots of stuff about this process that isn’t fair. If you’re waiting for a fair process, you’re going to be waiting for a long time,” Christie said. “You deal with the process we have. Answer the questions. If he answers the satisfaction of the American people, the issue will go away. If you don’t, it won’t.”

Carson today said he would not engage in the “politics of personal destruction” by directly responding to Trump. Carson also accused the media of misinterpreting some of Trumpm’s comments.

Christie is wrapping up a three-day campaign swing through Iowa. He attended a campaign office opening in Johnston this afternoon and will speak at a chili supper in Ames this evening.