You are here: Home / Fires/Accidents/Disasters / Creston firefighters win contest for being healthy 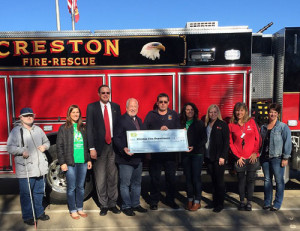 Out of all the fire departments across the state that took part in this year’s Iowa Healthiest State Initiative Contest just for firefighters, the Creston Fire Department was singled out as the winner.

Creston Fire Chief Todd Jackson says it was a pleasant surprise to be recognized — and even better to get the $1,000 check from the state.

“What we’re hoping to do with the $1,000 is, we already have $1,000 budgeted for our firefighter physicals and we’re going to add that to it to increase the number of physicals we’ll be able to do,” Chief Jackson says. Communities, schools, fire departments and other groups organized some 880 Healthiest State Walks this fall with events in all 99 counties statewide.

The check was presented to the Creston Fire Department by Iowa Lottery CEO Terry Rich, who is also chairman of the Iowa Heathiest State Initiative. “Creston was part of many fire departments and schools across the state that did both a fire drill and a walk, which was so important,” Rich says. “We thought this was a really good opportunity for the fall to emphasize the need for safety between fire drills and this Healthiest State Initiative, so we’re real proud of Creston.”

According to the Gallup-Healthways Well-Being Index, Iowa ranks 16th in the nation when it comes to being physically, emotionally and mentally healthy. Through various programs in the initiative, Iowa is aiming to eventually become number one.