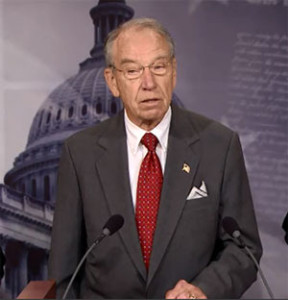 Iowa’s Governor Terry Branstad is joining at least two-dozen other governors in calling for the federal government not to send Syrian refugees to their states.

Governor Branstad is telling all Iowa agencies working on resettlement plans to stop, as there are reports at least one terrorist in last week’s Paris attacks got into France with the huge influx of refugees.

Iowa Senator Chuck Grassley hopes President Obama is swayed by the call of so many governors. “If it was just Governor Branstad or a governor of this state or that state, a single one or a couple, that would be a different story,” Grassley says, “but when you have a majority of the governors sending the signal that they’re sending, it is a very strong signal that, it seems to me, a president ought to have some respect for.”

Under current law, Grassley says the federal government is required to consult with the state’s governors periodically to discuss refugees. “Consultation gives an opportunity for discussion but if the administration wants to forego any suggestions from governors or from members of Congress, the federal government, under existing law, can do that,” Grassley says. “I don’t expect that law to be changed.”

Branstad issued a statement Monday afternoon, part of which reads: “In the past, the federal government has failed to be forthcoming and transparent with information on refugee resettlement and immigration issues. Openness and transparency on resettlement is paramount to the safety of Iowans. The federal government must assure that refugees have been properly screened and security protocols have been taken before being allowed in the United States.”

Grassley says he agrees with Branstad and is hopeful the Obama Administration will take heed. “This is a case where national security is equally as important as what the immigration laws are,” Grassley says. “In fact, the number-one responsibility of the federal government is to protect the American people. If there’s a danger there, I think that ought to be considered.” He adds, “We must do all we can to prevent a Paris-style attack from happening here.”

Grassley says under the administration’s latest proposed plan, we may not be able to stop such an attack in the U.S., because “we cannot tell who, among the thousands of Syrian refugees the administration wishes to resettle here, are terrorists.”

Governor Branstad’s release ends with these lines: “We have welcomed refugees from around the world into Iowa. We must continue to have compassion for others but we must also maintain the safety of Iowans and the security of our state. Until a thorough and thoughtful review is conducted by the intelligence community and the safety of Iowans can be assured, the federal government should not resettle any Syrian refugees in Iowa.”