You are here: Home / Education / Board of Education backs closing of Gladbrook school building 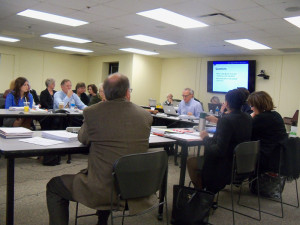 The State Board of Education met Wednesday in Des Moines.

The State Board of Education found Wednesday that the Gladbrook-Reinbeck School Board acted properly in voting to close the school in Gladbrook due to declining enrollment. Some Gladbrook residents did not want the elementary/middle school there closed and appealed the decision.

Administrative law judge Nicole Proesch reviewed the case and told the board there is one thing to look at in analyzing the decision. “If it is reasonable — as long as it is not unreasonable and as long as it makes it’s way into reasonableness — then we have to uphold the school district’s decision because we cannot substitute our judgment for their own,” Proesch says. Proesch recommended the decision stand.

“While we understand that the appellants did not like the decision of the school district and would have preferred an alternative outcome — that is not enough to overturn the local school board’s decision,” Proesch says. “Thus looking at this in the lens of abuse of discretion, it is recommended to close the Gladbrook attendance center.” Those against the closing requested that they be allowed to present oral arguments to the board.

Attorney Darrell Meyer represented those who want the school to stay open. He says the decision appears to be supported by substantial evidence, but says it is not. “For three reasons. One, the board knew of information, but chose to ignore it when making its decisions. Two, they chose to not know of some information. Three, they began the process with sort of a results oriented approach — which would explains numbers one and two,” Meyer says.

Meyer says the board justified the decision to close the Gladbrook school saying they would save $400,000. “What they knew but chose to ignore was there were close to 60…open enrollments, 25 of which had already been approved. That netted out to about a 40-thousand dollars savings once you lose those students,” Meyer says. He says that amount of savings would not justify closing the building. Meyer says the school board did not know of agreements that required them to maintain space for swimming a health center for the City of Gladbrook. He says the board “cannibalized” the district and divided the community with their decision.

Attorney Kristy Latta spoke for the school district. “It is our position that the decision properly applies the current relevant law to the facts that were found at a hearing before the administrative law judge. This is not a situation like some other decisions of the board where there has been an abuse of discretion to be found,” Latta says. Latta says the board did not divide the community.

“They weighed the interest and determined this was a situation where perhaps one segment of the community must yield to the district as a whole,” Latta says. “It is flawed to think there is a division of Gladbrook versus Reinbeck when in fact the district is Gladbrook-Reinbeck and the board is trying to make a decision that is in the best interest of the entire district.”

Board of Education member Mike May of Spirit Lake asked about the vote to close the school and was told five members from Reinbeck voted for the move while two from Gladbrook voted against it. “What bothers me is it gives pause to small districts to join with others,” May says. “I mean in the future, if you had a smaller district than the one you are joining with, isn’t it possible that the buildings in your district would at some point be scrapped and we would move to the big district because they have more votes?” Latta answered that the school board members are elected at large and are not elected based on the cities where they live.

The Board of Education voted to support the Gladbrook-Reinbeck School Board’s decision to close the Gladbrook school.