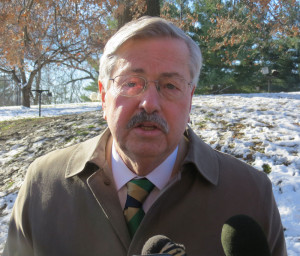 A group of Iowa clergy has delivered a letter to Governor Terry Branstad, saying they’re praying he will “reject fear and cruelty” and welcome Syrian refugees into the state.

Branstad is one of 30 governors citing safety concerns and resisting Syrian refugee resettlement. Reverend Jessica Peterson of the Congregational United Church of Christ in Newton says she signed the letter because she believes turning away refugees is “not the American way.”

“As a follower of Jesus, a refugee himself, I am called to welcome the stranger,” she says, “to offer freedom and relief to those who are persecuted and those who are oppressed.” Alejandro Alfaro-Santiz, a United Methodist minister in Des Moines, also signed the letter drafted by a group called Faith in Public Life.

“We understand that one of the people involved in the killings in Paris came in with the refugees,” Branstad says. “We don’t want that to happen here in Iowa or in America and so we think it would be wise to pause and make sure that the safety of our citizens is protected.”

A national group called “Faith in Public Life” has collected signatures from about 2,000 Christian, Jewish and Muslim clerics around the country, calling on Branstad and the other Republican governors to change their minds and open their states to Syrian refugees. Catholic bishops in Iowa and across the country issued statements last week, delivering the same message.