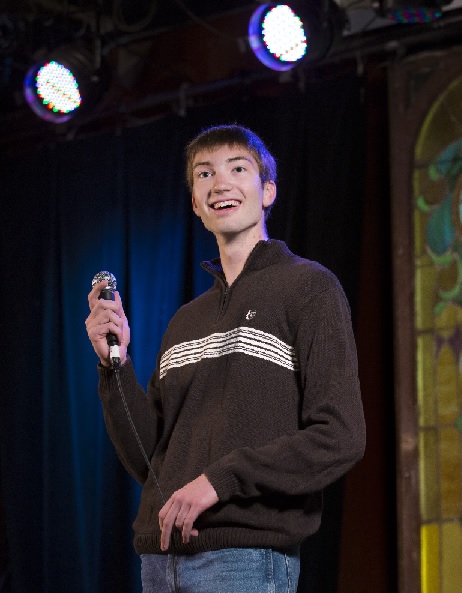 If members of a new club at Iowa State University get laughed at, they’ll consider it a job well done.

“That first seven minutes was terrifying for me and then I finally got a huge laugh,” Seymour says. “I told a really funny joke and I realized people thought I was funny. That was something that was new and interesting to me. Telling other people’s jokes is one thing but telling a joke you wrote and having people laugh at it is awesome.”

The final three minutes breezed by and Seymour says he was hooked and wanted more, so he formed the club, which now meets every week.

“The main goal of the club is to get performance experience,” Seymour says. “We’ve all done performances before, for the most part. Some of the newer members, we’re working on getting them up to the level where they can perform. After that, we just look for places to perform, look for opportunities and look to get our names out there.”

The comedy gigs they’re getting often do pay, though not a lot, he says. The benefits however aren’t necessarily monetary, but they’re coming in the form of a confidence boost.

“I had probably talked to 15 employers before taking that class and not really any of them gave me a second glance,” Seymour says. “After taking that class, I was able to talk with employers and had seven interviews the next career fair and I had a job offer that upcoming summer.”

The club, and the course, aren’t designed for students to make a career out of comedy, but to see how the skills of standup can benefit their education, their careers and their lives.