You are here: Home / Education / Rules approved for EpiPen use in schools 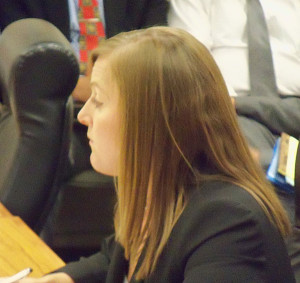 The State Board of Education has approved the final draft of rules to allow schools to use a device that is expected to help save the lives of students or others who experience severe allergic reactions.

Governor Terry Branstad signed a bill into law in April allowing schools to use what are called epinephrine auto-injectors or EpiPens.

Board of Education lawyer Nicole Proesch says one of the adjustments made to the final rules narrowed the definition of a school building. Proesch says the Iowa Association of School Boards asked for a change so the definition wouldn’t be so broad that it would include a shed or storage facility or a building where there weren’t people.

Proesch says they decided to make the definition of a school building a place where there would be students, adults or other people are present. “We know even if you had an EpiPen in a bus barn, the problem would be the practicality of being able to use it if you had it in a bus barn or somewhere other than where you would have a school nurse present or somebody that would be adequately trained,” Proesch explains. “Because it is more likely than not that the individual who is going to be trained to use the EPiPen injector is going to be your school nurse or some other individual present in the attendance center.”

The EpiPen can only be used by a person who has the proper training. The other change requires the schools to have two separate doses on hand. “We are requiring both a pediatric dose and an adult dose in every attendance center. And we had some pushback on that until we explained that you have to have both doses available as an equity issue. And you may have students who might be a weight that is not consistent with a pediatric dose. You have adults in the building as well, so we are going to be a sticklers about requiring both doses — that way you have either doses available if you need it.”

Proesch says they are also requiring schools to make a report when they use the device. “We wanted to get information back on that so we understand and know if our training the we have for EpiPens is adequate training,” according to Proesch. “So having the reporting mechanism allows us to make sure that we have the appropriate training that we need to have as well down the road.”

The decision on whether to have the EpiPens on hand is still up to the districts. “They are not required to, this is a voluntary thing that school districts can do. But if they do volunteer to do it, then they have to follow the rules and do it the way that the rules have outlined,” Proesch says.

She says the rules will go before the Legislative Rules Review Committee one more time, and if there are not major concerns, they would go into effect in January.