You are here: Home / Business / Iowa workplace deaths up in 2014 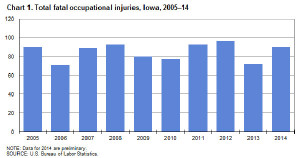 The U.S. Bureau of Labor Statistics preliminary report shows there were 90 fatal workplace injuries in Iowa in 2014, an increase of 18 from 2013.

“In Iowa, farming related occupations are still on top of the list. Construction and also, truck drivers as well,” Laporte says. The category of agriculture, forestry, fishing, and hunting had 28 deaths, up from 22 the previous year. Laporte says the construction industry saw an increase in deaths on the job.

“They experienced 12 workplace fatalities in 2013 and that edged up to 20 in 2014,” according to Laporte. He says many of the construction workplace deaths involved falls. Eighty-five of the 90 — or 94 percent — of those who died in workplace accidents in Iowa last year were men. Laporte says that is about the same percentage seen in the rest of the country.

“Women nationally accounted for eight percent of all fatal occupational injuries in 2014,” Laporte says. “So, nationwide, 92 percent of those who died on the job were men.”

Iowa’s 90 workplace deaths are more than several of the surrounding states in the region. “South Dakota 28, North Dakota dropped down to 38, and Nebraska was at 54. So, among some of the plains states Iowa did unfortunately experience the largest number of fatalities The recent numbers for Iowa have ranged from a high of 110 in 1992 to a low of 54 in 1995.

You can see more information on the workforce deaths at: www.bls.gov/regions/Midwest.