You are here: Home / News / Huckabee crossed county #99 off the list today (AUDIO) 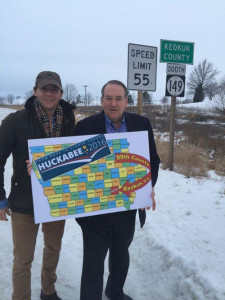 Republican presidential candidate Mike Huckabee says he is not daunted by the polls because his own campaign research indicates about three-quarters of the Iowa Republicans who plan to Caucuses haven’t settled on a candidate.

“The good news is we can do just about anything in the three-and-a-half weeks between now and the Caucuses,” Huckabee said tonight.

Huckabee — who won Iowa’s 2008 Caucuses — gave a brief pep talk tonight to an enthusiastic group of supporters gathered at his Iowa campaign headquarters.

“We have a job ahead of us. We’re not intimidated by what the polls say because the polls always are wrong at this point in the process. They were eight years ago. They were four years ago and they are today,” Huckabee said. “I’m counting on you guys.”

Over the past eight months Huckabee held town hall meetings in each of Iowa’s 99 counties. Huckabee crossed number 99 off the list with a visit to a school in Keokuk County this morning.

“We’ve done the grassroots kind of work and this month we’re doing 150 events in Iowa alone in the month of January and I think that’s how you win the Caucus,” Huckabee said. “You do it the old-fashioned way.”

Huckabee served 11 years as governor of Arkansas and he told reporters tonight he is counting on Iowans to choose a candidate with experience, who has been “seasoned” by serving as the chief executive of a state.

“It’s amazing how many people sitting in the well-lit studios in New York and Washington will pontificate about where Iowa is and where it’s going togo and they’re wrong every four years and you’d think at some point they might learn the lessons that Iowa voters date every candidate in the field, but they don’t put a ring on it until wedding day.”

There are 24 days left until the Caucuses.