You are here: Home / Sports / Iowa rolls at #4 Michigan State 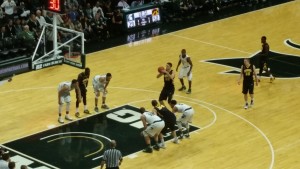 The 16th ranked Iowa Hawkeyes won for the first time in East Lansing since 1993.

” Whenever you can get a big lead in this building against that caliber of a team you feel really good about it”, said Clemmons. “The thing that you can’t do is get complacent and get too happy just because you got the lead.”

Iowa took advantage of 14 Michigan State turnovers in the opening half to take command and the Hawkeyes turned it over just once in the second half against Spartan pressure.

The Hawkeyes return home on Sunday afternoon to host Michigan.