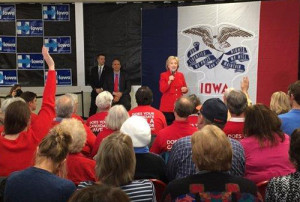 Seven days remain in the race to secure support in the February 1 Iowa’s Caucuses. The leading presidential candidates in both parties campaigned in Iowa this weekend.

On the Democratic side, Hillary Clinton and Bernie Sanders made multiple stops in the eastern half of the state.

“We started this campaign with no money, no political organization and nobody — none of the media, none of the experts — thought that we were anything more than a fringe candidacy,” Sanders said.

During an online “town hall meeting” with supporters, Sanders said his campaign is “shaking” the establishment of the Democratic Party.

“We said we were just going to go out to the American people and we’re going to ask them to support us if they want to see a transformation of American society,” Sanders said, “and that’s what they did.”

“We are now at 90 percent coverage under the Affordable Care Act,” Clinton said in Marion Sunday. “Seems to me it’s a lot easier to get from 90 to 100 percent than from zero to 100 percent.”

Clinton is stressing her own “commander-in-chief” credentials and offering a preview of the General Election argument she’d make against whomever Republicans nominate.

On the Republican side, Donald Trump is expressing increased confidence about winning Iowa — and the consequences for Republicans here if he doesn’t win.

“Iowa hasn’t had a winner in 16 years,” Trump said this weekend. “You’ve picked a lot of losers, folks.”

Ted Cruz barnstormed the state on Saturday and, in a joking way, stressed his outsider status.

“A blizzard hit Washington, shut down the government,” Cruz said and the crowd at a rally in Ankeny cheered. “The mainstream media immediately blamed it on me.”

The Iowa Caucuses are a party exercise. Party volunteers are lined up to run Democratic Caucuses and Republican Caucuses in each of Iowa’s 1681 voting precincts. Iowa Democratic Party chairwoman Andy McGuire says you can go on the party’s website, plug in your address, and find where your caucus will be held.

“There’s really nothing to be afraid of here. You can register at the door,” she says. “…It really is very easy to Caucus.”

Iowa GOP chair Jeff Kaufmann touts the new “app” has been developed to manage the results of each party’s caucuses.

“To show the nation and media and everyone that we’re listening we’re trying to improve this thing and we’re on the cutting edge,” Kaufmann says.

Kaufmann and McGuire made their comments during a weekend appearance on Iowa Public Television’s “Iowa Press” program.

Kaufmann says the “canvas” will occur within 48 hours this year, so the party’s certified results will be known days before New Hampshire’s Primary.