You are here: Home / Business / Fast food workers in Des Moines join national call for an increase in pay 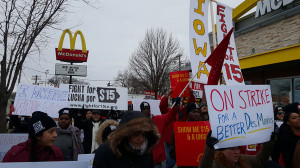 Fast food workers in Des Moines want their pay upped to $15 an hour.

Dozens of fast food workers in Des Moines walked out of their jobs today calling for union rights and pay of 15 bucks an hour.

The protest was timed with the Republican presidential debate in Iowa’s capital city tonight.

Thirty-year-old Wiley King says he’s paid $8 an hour at Wendy’s. “It’s very difficult working for $8 an hour. There are a lot of critical decisions you have to make as far as sacrifices, deciding what’s more important and what has to be done,” King said.

Originally from Milwaukee, King moved to Des Moines as a teenager with his mother and siblings. He’s worked at several fast food restaurants over the past five years. “They say $15 an hour is too high. I don’t believe that because that would just basically be what’s necessary to survive, to pay rent, transportation, education, and things like health insurance,” King said. 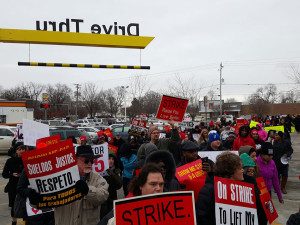 Workers protest at a McDonald’s near the state fairgrounds

“These companies…are making billions and just give us $7.25 and we can’t even meet the basic needs of our living situations,” Davis said.

The 19-year-old Davis said she’s worked for three years at fast food restaurants, but has never made more than $7.25 an hour. And, at times, she’s held down three jobs at once.

“Only making $7.25, I can’t afford my own place. I can’t afford to go to college. I have to struggle from check to check and borrow money from people,” Davis said. “I shouldn’t have to do that when I’m working and doing three jobs at time. The workers marched around a McDonald’s near the Iowa State Fairgrounds in Des Moines over the noon hour.

The national group “Fight for 15” helped organize the rally — claiming just under half of the people working in Iowa are paid less than $15 an hour. The strike in Des Moines was the third in recent months to coincide with presidential debates.

The Fight for 15 group also organized protests in Milwaukee in November and Charlotte, North Carolina in January.