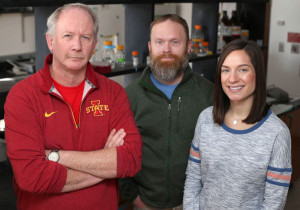 Matthew Rowling, an ISU nutrition professor, says vitamin D is important for bone health and protecting against cancer and other diseases, but diabetics have trouble retaining it and other nutrients because of poor kidney function.

“If they’re trying to get vitamin D in their diet, eggs are an excellent source,” Rowling says. “We’ve shown that the vitamin D in the egg that’s consumed, it sticks around longer and it is a rich source that can improve it more than if you took a vitamin D supplement.”

Studies in humans aren’t yet scheduled, so Rowling couldn’t make any recommendations for egg consumption. “I don’t want to make that statement yet,” Rowling says. “We’re still investigating it. Before we go out and say you need to eat five to ten eggs or whatever to get the vitamin D that you need, we don’t know what the quantity is yet.”

The rats in the study were fed the equivalent of 17 to 18 eggs daily, but researchers expect a much lower dosage will be effective in people. “I would say within the next year or two, we can probably put out something that’s reliable,” Rowling says. “Of course, we have to see this sort of study done in humans. That’s one of the next goals that we want to do.” The whole egg needs to be consumed, he says, as egg whites provide protein while the vitamin D is only in the yolk.

The research was funded by the Egg Nutrition Center and is being published in the Journal of Agricultural and Food Chemistry.