You are here: Home / News / Concussion bill moves ahead in state senate 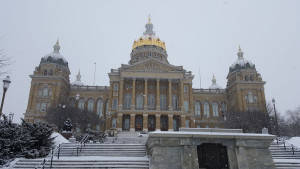 State lawmakers concerned about concussions among high school athletes moved a bill forward in the Iowa Senate Wednesday to make it harder for coaches to put an injured player back in the game without proper rest or evaluation.

There’s growing concern about the impact of untreated or repeat concussions on athletes from the amateur to the professional level.

Senator Tod Bowman, a Democrat from Maquoketa, says his son was removed from a wrestling match his junior year for a concussion. “My son wanted to return to action. That’s the constant battle coaches face where athletic trainers or other medical personnel have a little different perspective in life moving forward,” Bowman says.

Bowman says the trainer was present when his son was knocked out during the match and settled the issue about whether he would continue. “And she immediately evaluated him and said ‘you’re done son,'” according to Bowman.

The Senate bill would require a professional trainer to evaluate injured players at varsity competitions for the so-called collision sports of football, soccer and wrestling. The trainer would also notify the school’s athletic director if an athlete from a visiting team suffered a concussion. Trainers who attended the statehouse hearing told of coaches putting star players back in the game.

Skeptics wonder if there would be enough athletic trainers in the state to staff every varsity event — for example, on a Friday night when hundreds of teams are playing across the state.