You are here: Home / News / Iowa Utilities Board could make decision on Bakken pipeline today 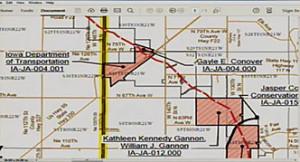 Members of the IUB looked at maps as they discussed the Bakken pipeline route.

The Iowa Utilities Board continued going over material Wednesday on the request for a construction permit for the Bakken oil pipeline.

The pipeline would run from the northwest corner of the state down to the southeast. The board’s last deliberation meeting is scheduled for today.

The chief operations officer for the IUB, Cecil Wright, is one of the people going through the hundreds of documents to see if the board has any questions. “This objection raises questions as to how the pipeline will affect the future of the property, and also the value of the property,” Wright says.

The IUB members ask questions about the testimony and documents supporting the landowners’ concerns. They also talked about parts of the pipeline that would cross state roadways. The lawyer for the board, David Lynch, says that is a different process.

“The Department of Transportation has a standard utility accommodation policy which it applies to a variety of different kinds of linear infrastructure — utilities that want to cross DOT property. As you could imagine, its hard to build a transmission line or pipeline without it crossing a highway,” Lynch says. He says that DOT policy dictates the placement of the pipeline.

“When they have to cross at roughly a 90-degree angle. Who is responsible for any excess road repair costs if that happens. It’s all covered,” Lynch says. The three board members looked at maps of the proposed pipeline and the individual properties as Wright talked about them. For example, he talked about a Jasper County landowner’s concerns about the impact of the pipeline.

“The issue is with regard to where the proposed line is now, is her expectation is to create an organic garden. And she is afraid that pipeline will impact the fertility or the productivity of the land,” Wright says. Some 300 property owners have refused to grant access to their property for the pipeline.

The board began its meetings on Monday and has scheduled one last meeting for today. The board released a statement prior to the start of the meeting that it may or may not make a decision on granting a license at the end of the meetings.