You are here: Home / Agriculture / Study finds Iowa has most cases of people trapped in grain bins 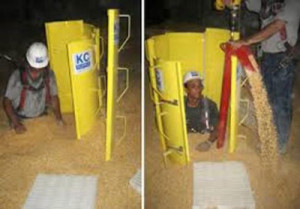 More people became trapped in grain bins in Iowa last year than in any other state.

That’s according to a new study from Purdue University. It found there were at least seven incidents in Iowa when a person became entrapped in a grain bin or other confined space.

Dave Holm, executive director of the Iowa Institute for Cooperatives, says grain bin accidents typically happen when the victim is in a hurry. “I think most people recognize the dangers of crawling into a grain bin…but they get in a hurry and don’t stop to think about the potential dangers of what they’re doing,” Holm said.

Researchers at Purdue say the U.S. had 47 entrapments in grain bins and other confined spaces in 2015. That down from 71 in 2014 and it’s the lowest number in a decade.Holm says operators of commercial grain bins are constantly reminded about safety measures and that’s one reason for the decline in numbers.

But, the researchers at Purdue point out that many nonfatal entrapments go unreported each year because there’s no mandatory national reporting system. The Purdue study found 25 people died on farm operations last year due to entrapments, down from 31 in 2014.