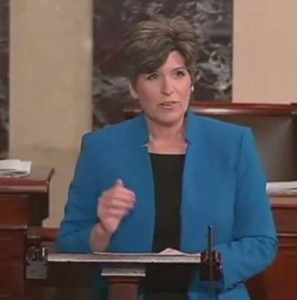 Iowa Senator Joni Ernst, a Republican from Red Oak, says she supports fellow U.S. Senator Chuck Grassley in his decision to not hold a hearing on any nominee to fill the vacancy on the Supreme Court until after November’s election.

“I agree with Senator Chuck Grassley on this. And do think that the American people will have a voice this fall when they go out to the ballot box,” Ernst says.

Grassley, who is the chair of the Senate Judiciary Committee has been taking heat from Democrats who say the public spoke by electing the president in 2012 and he should be able to nominate someone. Ernst says she goes back to the most recent national election to determine what voters want.

“In 2014 the voters had a voice and we now have a Republican majority. And so we do have a Republican chair to the Judiciary Committee, we have a majority in the Senate and we believe the people spoke loud and clear in 2014 that they were not happy with what was going on,” Ernst says.

Ernst’s election in 2014 helped Republicans win control of the Senate. And her victory over former Congressman Bruce Braley was helped in part by a video of Braley telling a group of lawyers in Texas at a fundraiser that if he wasn’t elected then Grassley — “a farmer who never went to law school” — would become chair of the Senate Judiciary Committee.

Ernst was asked if the decision to not hold a hearing on a Supreme Court nominee could backfire on Republicans. She says they are fully aware of the consequences of elections.

Ernst was also asked if the Supreme Court issue has hurt the ability for Democrats and Republicans to work together on other issues. “I don’t know, I think that there are a lot of people who are intent on getting our work done here in the United States Senate,” Ernst says. She says they have a lot of work to get done, including the spending bills. “I really haven’t seen any detraction from that type of work so far. So, I do hope that we can continue on with the business of the Senate just as we did last year,” Ernst says.

Ernst made her comments during her weekly conference call with the media.