You are here: Home / Military / Iowa bill would aid ‘Missing in America’ project 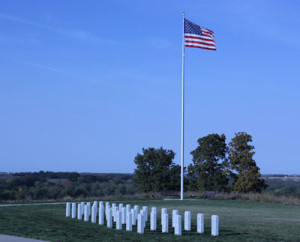 Tombstones at the Iowa Veterans Cemetery.

A bill that would make it easier for as many as 80 deceased veterans to reach their final resting place will be debated today in an Iowa Senate committee.

“Sometimes when people are cremated there are occasions where the family just doesn’t come and claim the remains and they stay on our shelves for quite a while,” says Michael Triplett, a lobbyist for the Iowa Funeral Directors Association.

Other states have passed laws that allow a veterans’ organization to claim the cremated remains of confirmed veterans who were homeless or indigent when they died, so those veterans may be burial with full military honors.

“What we need to do, though, in order to make that work in the state of Iowa is to set up a framework where everyone’s rights are protected, including those who may want to claim the remains, but who haven’t gotten around to it, or haven’t been notified,” Triplett says.

Under current law, Iowa funeral directors are not allowed to release cremated remains to anyone but a family member. Triplett says as many as 80 veterans might be buried at the Iowa Veterans Cemetery in Van Meter if the bill becomes law.

The “Missing in America” project was launched in 2007 to seek out the “tens of thousands” of indigent veterans who have died, but who remain shelved in funeral homes around the country. The bill to address the problem in Iowa has passed the Iowa House and will be considered in the Senate Veterans Affairs Committee later today.