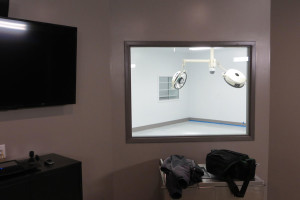 The newest hospital in the state’s capital city plans to offer visitors a chance to watch surgeries and other procedures from a special viewing area.

There won’t be any public information laws broken, as the new facility at the Blank Park Zoo is for treating animals.

Senior veterinarian June Olds says the 1.5 million dollar facility resembles most any modern medical center; from the surgical suite to the laboratory and pharmacy. It will mean better care for nearly 800 animals, and fewer trips to Iowa State University’s School of Veterinary Medicine

“This surgery room is bigger than our entire hospital and surgery room combined, used to be,” Olds says. The zoo now has an in-patient facility for the first time.

“We can hold an antelope or a dangerous animal probably up to the size of a snow leopard — probably most likely won’t be able to handle a lion. Snow leopards we feel it’s escape proof,” according to Olds.

A 20 year old Cattle Egret was the first patient, rolled in to the recovery area for treatment of a sinus infection. Geriatric care and preventative medicine will keep the staff busy. The zoo’s first full time vet, Andrew Gall, says Bur trauma picks up during the breeding season. “You know it’s normal between a breeding pair of animals to get a little rough with each other, it’s all normal,” Gall says. “Some of those times we intervene and whether or not we have to stitch something closed or clean something up, we feel like we have the necessities here to be able to intervene and do that instead of just saying, you know, it’ll be fine, it will heal on its own.”

The zoo’s affiliation with Iowa State is stronger than ever; much of the new construction came through ISU funding, and a new dormitory lets veterinary students be on-call, to work on a range of 200 species. Overhead cameras are mounted in key treatment areas allowing veterinary classes to watch procedures live in Ames. Later this year, visitors can sign in for a behind-the-scenes hospital tour.

Kevin Drees is Director of Animal Care. “Especially you know this first season, it’s brand new now. Maybe it will just be a couple days a week that it’s available but it’s sort of like you arrive and you kind of have that option of oh if I want to come back at 11, I can take the 20 minute tour to see the hospital, ” Drees says.

Doctor Olds says the biggest difference with human hospitals is the wide array of species that will be admitted here. Powerful and unpredictable patients are sedated, and just like just like people, annual physicals are recommended.

“We’ve tried to ramp up our preventative medicine program so were not fighting fires all the time, were not addressing those, just like you or I if we go to the doctor annually then the more likely to pick up on things before them become a crisis and that’s what we want to do with this hospital and with the care we provide the animals,” Old says.

One other thing that’s different about this hospital — it is equipped with a tranquilizer gun and a shotgun cabinet — just in case a patient goes rogue.