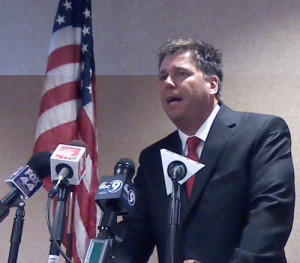 Republican State Senator Rick Bertrand of Sioux City has made it official. He is challenging fellow Republican Steve King in the June Primary in Iowa’s fourth congressional district.

“Two weeks ago I floated the notion I was strongly considering a run for the fourth district and the response has been tremendous, ironically mostly from Republicans,” Bertrand said today in Sioux City. “…I am a viable, credible candidate and would pose the greatest threat that Mr. King has ever faced in 14 years.”

King was first elected to congress in 2002. Bertrand, who is 46 years old, is a commercial developer from Sioux City who is in the middle of his second term in the Iowa Senate. Congressman King told Radio Iowa Bertrand was recruited by “establishment figures” in the GOP who are “frustrated they can’t tell (King) what to do.”

“The people that are promoting this are angry,” King said during an interview. “They want a congressman that will do what they tell them to do rather than reflect the will of the people they represent.”

King and Republican Governor Terry Branstad had a very public falling out right before the Iowa Caucuses. Branstad said he hoped Ted Cruz — the candidate King endorsed — would be defeated. King specifically accused Eric Branstad, the governor’s son, of being involved in recruiting his primary opponent.

“I will not, but I could name four others who turned down that opportunity even though they were offered a good number of funds to run their campaign for them,” King said.

Eric Branstad told Radio Iowa today that he had “zero involvement whatsoever” in recruiting Bertrand, but he said primaries are “very healthy” for the party.

Bertrand today said it is “comical” to suggest his candidacy is backed by the establishment and special interests in Des Moines.

And Bertrand said King will have to answer for supporting a presidential candidate who wants to get rid of the federal ethanol production mandate. King said he’s waiting to see if Governor Branstad endorses a candidate in this primary, “then we’ll know” whether the Branstads support him or Bertrand.